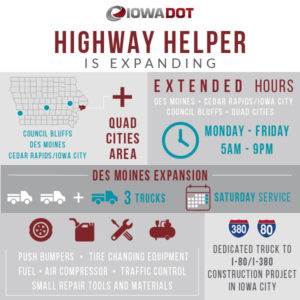 A spokesperson for the Iowa Department of Transportation says they are expanding the hours and coverage of its Highway Helper trucks at a lower cost.

The DOT’s Bonnie Castillo says the bid for the program came in at $2.3 million, compared to $3.3 million under the previous contract. She says they’ve extended the hours from 5 a.m. until 9 p.m. “In the Des Moines area we’ve added a third truck to help with the patrol routes Monday through Friday — as well as a Saturday truck from 10 a.m. to six p.m. We’ve added a dedicated truck to the 380/80 construction project in the Cedar Rapids area. And then we’ve also expanded the service to include the Quad City area,” Castillo says.

Castillo says the changes are in response to what they’re seeing in the busiest areas of the interstate. “We’re looking at crash reports. We’re looking at the volume of traffic and the hours that the traffic starts to pick up. And then we are also looking at the number of delays we’re seeing and the cost to the traveling public because of those delays,” Castillo explains.

One of their goals is to get things moving again after minor accidents. “The quicker that you can get those lanes cleared and get traffic moving is very important,” Castillo says. “And so we have push bumpers on all of the trucks and if there is a minor non-injury crash — we can just push those vehicles off the roadway to get traffic moving.”

A second goal of the program is to provide protection for those who are working a crash scene. She says they want to be there to provide traffic control, so they have a message board on the trucks and cones. They also help motorists will issues that arise on the roadway. She says they can help with tire changes, jump starts and they can give out up to two gallons of gas. Castillo says they consider being stranded on the interstate is an emergency situation.

“Being stranded on the side of the interstate is very dangerous — and so we want you to call 911 and ask for assistance,” according to Castillo. Castillo says law enforcement agencies know when a Highway Helper is in the area and will send them when you call. She says in some cases the trucks may see you first and stop to help.