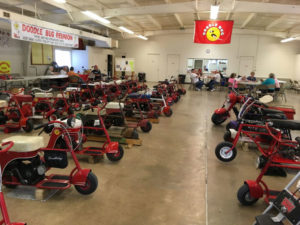 People from as far away as California and New York have made their way to Webster City to hang out with other owners of vintage “Doodle Bug” motor scooters.

Vern Ratcliff, one of the organizers of the annual Doodle Bug reunion, says 40,000 of the red scooters were made in Webster City between 1946 and ’48.

“We’re still estimating how many are left,” Ratcliff says. “We have no idea really. New ones keep showing up…We’ve put out an estimate of a thousand, but that’s just a guess.”

Jim Juon of Webster City says during World War II, it was almost impossible to buy a car and gasoline was scarce and expensive.

“Right after the war, then, in ’46 they started building these Doodle Bugs and they were quite popular,” Juon says, “even through…they were about $900 in today’s money.”

The post-war economic boom led to the demise of the Doodle Bug, according to Juon.

“The economy took off and they started building cars again and gasoline was more available and the price of them pretty much doubled because of inflation,” Juon says. “People lost interest in buying them. They’d rather buy a new car.”

The 33rd annual reunion for Doodle Bug owners is being held at the Hamilton County Fairgrounds through this Saturday. Some of the Doodle Bugs are for sale and some owners are shopping for parts. Doodle Bugs are also being driven around the streets of Webster City.