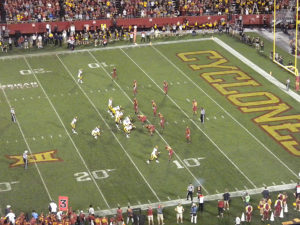 The Iowa Hawkeyes outlasted the Iowa State Cyclones in a game that saw two lightning delays of nearly three hours to win 18-17 Saturday in Ames.

The one-point win was the closest margin in the 67 games the two have played, and gave Iowa its fifth straight win in the series.

In the winning locker room Hawkeye coach Kirk Ferentz says his team did what it needed to do in tough circumstances.
“Very proud of our team, our staff, the resiliency hat they showed through the entire game. You know, one thing you can almost bet on in this series is that it is going to be a four-quarter game, today was obviously that,” Ferentz said. 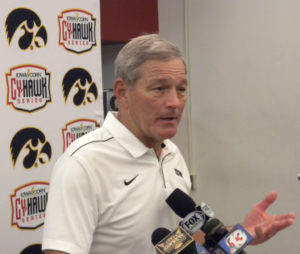 Iowa recovered a punt that went off the back of an Iowa State player late in the game and was able to run out the clock after it looked like the Cyclones were going to get a chance to try and win the game on a final drive.

Ferentz says that’s the way the whole game went.
“A lot of ups and downs, including the weather, hard to script to prepare for that for that. The bottom line it was a real test of mental toughness, physical toughness. I thought our guys did a great job against a team that played extremely well, they are an outstanding football team too, so we’re just thrilled to get the victory,” Ferentz said.

Ferentz says they did what they had to do in the weather delays to try and keep the team ready — including sending the staff out to get sandwiches. The starting and stopping and then preparing to play again twice was not something he likes to see.

“I hate pregame warmup — it’s one of my least favorite things — we got three of them today. What a bonus that was,” Ferentz said.

Iowa quarterback Nate Stanley make some big plays late in the game to help his team win, including scoring their only touchdown on a 1-yard run He talked about how he handled the delays.

“I just went over the game plan in my head, asked the questions that I needed to asked and then just kind of relaxed. Made sure I was eating some food, staying hydrated and making sure that I had energy, because it was an extremely long game, “Stanley said.
He says it is a big win for this team. “I think it shows that we’re finishers, we are going to fight to the end and we are to do anything to make sure we win,” according to Stanley. 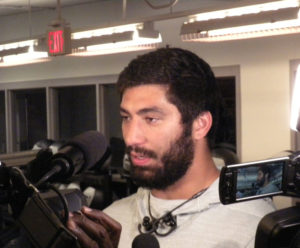 He said the important thing is they didn’t stop playing hard after the delays.
“We came back and we just tried to keep in stride and not lose focus and keep going,” Epenesa said.

Epenesa said there will be a lot to look at and work on from this game.
“We are gonna see that game was not good. We didn’t play very well…we didn’t do things the way we usually do and it’s frustrating to see that,” Epenesa says. “But we did work hard, we did scratch, we did fight and even though it wasn’t pretty — we still got the win — and that’s really what matters.”

He said this game will be something to look back on and remember.”In the future when we look back, we are all going to laugh and smile because that’s five years in a row, and we are sending the seniors off with being undefeated in playing Iowa State,” Epenesa said.

Iowa moves to 3-0 on the season and has a bye week. Iowa State falls to 1-1 and will host Louisiana-Monroe.