You are here: Home / News / Gabbard says U.S. ‘on the brink of war with Iran’ 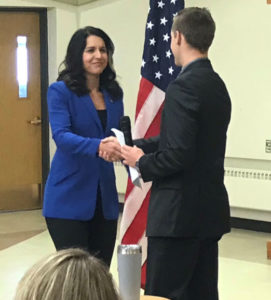 “We are literally right now on the brink of a war with Iran,” Gabbard said this weekend.

Trump tweeted Sunday that Saudi Arabia’s oil supply was attacked and the U.S. is waiting to hear from the Saudis as to how “we would proceed!” Gabbard discussed the situation during a campaign stop in Newton.

“They’ve been trying to go to war with Iran for a really long time,” Gabbard said, “and they have been taking action and laying down the groundwork to do so.”

Last night, Gabbard mentioned a tweet she sent arguing Trump is not pursuing an “America First” policy when it comes to Saudi Arabia.

“There are so many things wrong with what he said. We, the United States of America with the strongest military in the world, are ‘locked and loaded, he says,” Gabbard said in Ankeny. “…Trump is bending the knee to the interests and the wishes of Saudi Arabia and their kingdom and using my brothers and sisters in uniform to carry out their wishes.”

“I don’t use those words lightly and when I put out that tweet I couldn’t find any other word to describe what he is doing to our service members and to our country,” Gabbard said. “We need a commander-in-chief who will put the interests of the American people and of our country first.”

In Newton, Gabbard told the crowd that going to war is sometimes necessary to defend the safety and security of the American people, but she argued an unnecessary war with Iran would cost the country trillions of dollars and have regional consequences. Gabbard said her past military service and experience, unlike Trump, gives her a better understanding of the diplomacy that’s needed to avoid war.