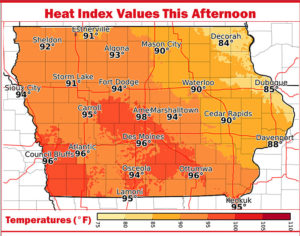 The first day of fall is exactly one week away and the last week of summer is going out with some heat. National Weather Service meteorologist,

Melinda Beerends, says the warm up starts today. “We are looking at high temperatures today and into Tuesday into the mid to upper 80s and combined with the humidity that’s around — also heat index values up into the 90s across much of the state,” according to Beerends.

She says it will likely not be record-setting heat. “It is somewhat unusual. We are well above normal. Much of the normal temperatures for this time of year are up in the 70s — however a lot of our records are up into the mid to upper 90s — so not as hot as it could be this time of year,” Beerends says. She says you’ll probably need air conditioning most of the week.

“Warmest temperatures are today and Tuesday, but we continue to see highs all the way through much of this week into the 80’s. So they continue well above normal pretty much through this entire week,” she says.

Beerends describes the week this way. “A little bit of prolonged summer,” she says. The first day of fall is next Monday, September 23rd.