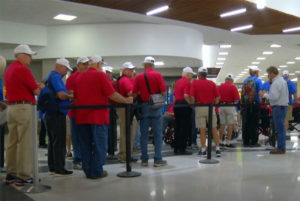 More than 100 veterans left from Cedar Rapids this morning on the 37th Eastern Iowa Honor Flight.

“It’s great for our volunteers, but especially for our veterans who might not have gotten the recognition in the past,” Adams says. “They get a great thrill spending the day with other veterans touring all the monuments that are dedicated to their service.”

The flight will returns tonight at 8:45 to the Cedar Rapids airport. The public is invited to come out thank the veterans as they return.