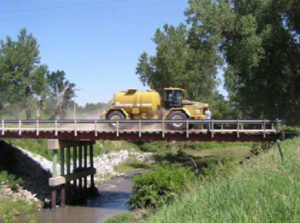 DOT photo of a rural bridge.

The Iowa Department of Transportation has been awarded federal money from two different programs to help repair bridges across the state.

The DOT’s Nicole Moore says one program provides state’s money to repair the driving surface of bridges. “Iowa received $25.3, and we received that money because we have more than seven-and-a-half percent of our bridge deck area listed in poor condition,” Moore explains. The state has some 24,000 bridges, with 4,000 owned by the state, 18,666 owned by counties, and 1,80 owned by cities.

“The DOT is going to use $2,3 million of that money — and then the rest will go to the cities and counties,” Moore explains. She says they will use a formula already in place to determine how much money goes toward county bridges.”The way they get allocated that money is based a lot on their square footage of deficient bridges,” Moore says. She says they still have to meet with the cities to determine how that money will be allocated. Moore says the surfaces of the bridges vary greatly and some are made of wood.

The other money comes from what’s call the Competitive Highway Bridge Program, and it is limited to rural states. Moore says Iowa will receive more than $33 million — which covers 55% of the construction costs. “There was only 25 states even eligible to even apply for this money. There was $225 million in the pot of money, and we had to submit grant applications,” according to Moore. “Only the DOT’s could submit applications — so you couldn’t have counties and cities submit an application right directly to the federal government in this particular case.”

The federal government required the bridges to be bundled together so two or more would be done at the same time. Moore says there are a total of 77 bridges that will get work done. “There are 68 county bridges across 45 different counties. There five city bridges in four different cities. There are four state bridges — and those are located on Highway One, just southwest of Iowa City,” Moore says.

She says they focused on “structurally deficient” or “poor” bridges that had a traffic count of 100 vehicles or more each day.