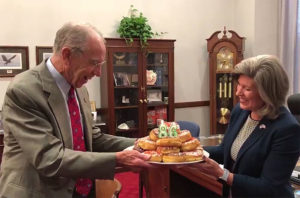 “Since the day I was born, I have celebrated Constitution Day,” Grassley said this morning during a conference call with Iowa reporters. “That’s because the 39 delegates signing the United States Constitution on September the 17th Is exactly 146 years before I was born.”

Grassley, a prolific tweeter who sometimes uses the Twitter platform to complain about History Channel programming, is now 86 years old. He’s has served in elected office since 1959, first as a state legislator, then as a member of the U.S. House of Representatives. Grassley has been a member of the U.S. Senate since 1981. He recently told reporters to ask him in two-and-a-half years if he’ll run for a ninth term in 2022.

“Do you think I just sit around and think about reelection?” Grassley asked rhetorically during an appearance on Iowa Public Television’s “Iowa Press” program in late August.

Grassley said he’s healthy and sticking with the running habit he started at age 65. Grassley runs a three-mile route four days a week.

Grassley has been celebrating his birthday in his Washington, D.C. office with ice cream — a favorite food group for Grassley — as well as lots of donuts. Fellow Iowa Senator Joni Ernst delivered a platter of donuts this morning to Grassley, with birthday candles burning on top.

Since Grassley is currently the longest-serving Republican senator, he holds the office of president pro tempore of the U.S. Senate.