You are here: Home / News / ISU unsure what ‘inappropriate actions’ were toward U-I band 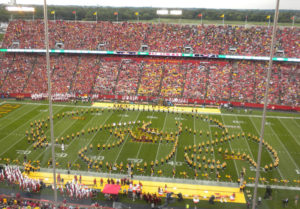 The mystery continues on what prompted University of Iowa Athletic Director Gary Barta to release a statement Monday saying the U-I had been made aware of inappropriate actions toward members of the band and staff during Saturday’s football game in Ames.

Iowa State Athletic Director Jamie Pollard was asked about it Tuesday and says he has no idea what happed. “All we know is that Iowa issued a press release. I couldn’t tell you what happened, when it happened or where it happened. No on has been able to ascertain that information or provide it to us,” Pollard says.

Some national media outlets have picked up on the band story after the meeting between the two football teams was featured on ESPN’s Gameday broadcast Saturday. Pollard says it is disappointing to not know anything more. “This state had a national audience with Gameday. And it was an awesome celebratory day for both Iowa and Iowa State and it brought great exposure to the Cy-Hawk series and Iowa corn. And it pains me to think that a pretty vague release has kind of damaged that nationally,” according to Pollard.

Both bands played during the pregame and halftime of the game — which is part of the tradition of the football matchup.

Here is the statement Barta released Monday:
“University of Iowa Athletics has been made aware of inappropriate actions made toward student members and staff of the Hawkeye Marching Band while attending the Iowa State football game Sept. 14. We have contacted Iowa State Athletics administration and are working to gather additional information. Our main priority is the safety of all Iowa students, staff, and coaches when attending events away from Iowa City.”