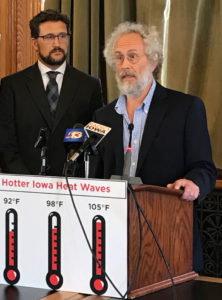 A group of 216 “climate educators” from 38 colleges and universities in Iowa have issued a statement, warning “extreme” temperatures are ahead.

“Conditions will become very dangerous at times, much more so than we are experiencing at the present time,” Iowa State Univesity atmospheric sciences professor Bill Gutowski said during a news conference this morning at the statehouse.

The group’s analysis indicates the number of days when temperatures exceed 90 degrees will at least double within the next two decades.

Yet the group of Iowa scientists warns flooding is more likely with a warmer and more humid atmosphere, plus Iowans may have to adjust when they spend time outdoors to avoid heat-related illnesses.

“The Iowans most at risk for becoming ill — whether having heat exhaustion, heat cramps, heat stroke or suffering death — include our friends and neighbors who work outside on a regular basis, older adults above age 65, infants and children, those individuals with chronic conditions, low-income households and our athletes,” Drake University environmental science professor Peter Levi said.

Levi said 1435 people died of heat-related illnesses during the recent heat wave in France and two-thirds of those who died were over the age of 75. There will be an economic as well as a health impact to rising temperatures, according to Levi, who indicated the state’s livestock industry will have to adjust to extreme heat.

“Confined livestock are at increased risk of death or significantly lower productivity as livestock will not reach market weight in the same time frame when stressed due to high temperatures,” Levi said.

The 2019 Iowa Climate Statement concludes “dangerous heat events will be more frequent and more severe.” The group of Iowa scientists acknowledge climate change has become a controversial issue in the political atmosphere and they’ve not been able to convince everyone of the severity of future weather disruptions. The group is emphasizing that Iowans can take action on a local level, by doing things like installing solar panels and encouraging utility companies to diversity with wind and solar projects.