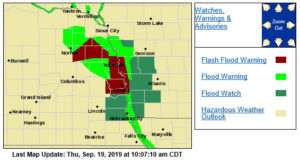 National Weather Service forecasters are recalculating the crest of the Missouri River in the Council Bluffs area due to early morning rains.

Meteorologist Taylor Nicolaisen at the National Weather Service office across the river in Valley, Nebraska says as much as four inches of rain fell on the north side of Omaha during this morning’s storm. Three-and-a-half inches was reported in Crescent, Iowa.

“It will bump up the river marginally, at a minimum, here with the crest that was already forecast,” Nicolaisen says.

The Missouri River crest is starting today in the Omaha/Council Bluffs metro. Heavy rain has been reported in northest Iowa and the National Weather Service has issued a flash flood warning that includes the city of Dubuque. Forecasters warn hail is possible in the storms striking in eastern Iowa.

The storm that hit in parts of western Iowa early this morning also produced a lot of lightning around 6 a.m. In a 50-mile radius of Omaha, the National Weather Service recorded 100 cloud-to-ground strikes every five minutes.

In addition to areas with flash flood warning, tThe National Weather Service has issued a flash flood watch for a swath of Iowa that stretches from Council Bluffs to Decorah and the northeast tip of the state. Nicolaisen says there’s a lot of moisture in high levels of the atmosphere.

“The atmosphere is absolutely juicy,” he says. “…That’s going to be kind of the trend here. We’re going to at least be capable of heavy rain of and on here in the next few weeks.”

Nicolaisen warns there’s a chance of heavy rain in the Missouri River valley from South Dakota through Kansas and Missouri through the rest of September and into early October.