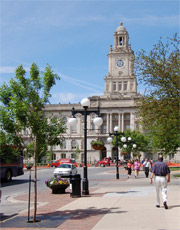 The Iowa Senate’s Oversight Committee will hold a hearing to examine the state Judicial Branch contract with a security firm that led two employees to break into two county courthouses.

Two employees of an international cybersecurity firm were caught breaking into the Polk County Courthouse in Des Moines and the two were arrested inside the Dallas County Courthouse in Adel. The company issued a statement Wednesday. It said the scope of the contract for testing the security of Iowa’s electronic court system wasn’t clear to them or officials in the court system who hired them.

Senator Amy Sinclair a Republican from Allerton who is chairwoman of Senate’s Oversight Committee, said the panel has “a number of questions” — including how “staged burglaries” improve court services.

A date for the oversight panel’s hearing has not been set.