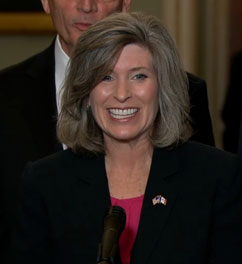 Trump is meeting today with key senators who represent oil-producing states. Iowa Senator Joni Ernst told reporters late this morning she, too, has had “many, many, many conversations” with the president about corn-based ethanol.

“I do believe that we will come away with a solution for the crisis that we see with our ethanol facilities,” Ernst said during a telephone conference call.

Ernst and other Iowa officials, though, have made clear they need to see a document from the EPA laying out the details of any ethanol agreement before they’ll celebrate.

“I really do need to see something written on a piece of paper,” Ernst said, “because while the president, I think his intentions are wonderful in supporting our farmers, we have seen EPA throw us under the bus before.”

Ernst said Trump has “made a very strong commitment” to force the oil industry to blend millions of additional gallons of ethanol into gasoline, but there are a lot of people inside the administration, she said, who “support big oil.”

“We need to see this deal in writing before we are out there applauding it or supporting it, so I do think that we will have that information to us very soon,” Ernst said. “It should, hopefully, come out this week.”

Ernst said she and other ethanol advocates must continue to be “very, very aggressive and vocal” with the president. According to Ernst, Trump “did not understand the full implications” when he gave the EPA the go-ahead in August to grant 31 oil refineries an ethanol waiver.

“The president expressed to me he didn’t want to see small refineries close and I said: ‘Yes, I understand that, Mr. President. We don’t either. We don’t want to see people their lose jobs,’ but certainly we see that in Iowa with our own ethanol industry. You know, our plants are closing now,'” Ernst said, “and that wasn’t fully explained to him.”

Two northwest Iowa ethanol plants have temporarily shut down and a handful of others have reduced production levels.