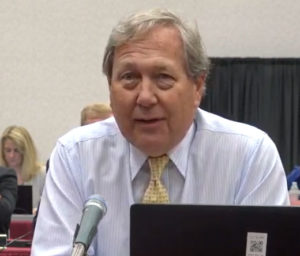 A sign hoisted by an Iowa State student in the crowd gathered for ESPN’s “Gameday” telecast from Ames last weekend has now generated more than $200,000dollars for the University of Iowa’s Children’s Hospital.

Harreld says Busch Beer and Venmo were impressed after the Altoona man said he would keep enough money from his “Venmo” account for one case of beer and then would donate the rest to the hospital. They’ve agreed to match the donations.
“So that’s a total of $225,000. And all the parties — including Carson and the donors have agreed to keep the campaign open until the end of the month,” according to Harreld, “so any of you who are so inclined to donate might go to his website and do so.” 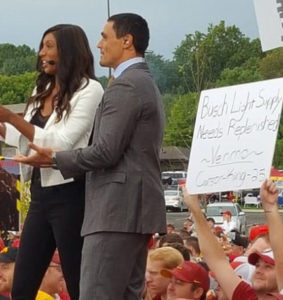 Carson King holding up his sign on ESPN’s Gameday.

Harreld says it was a great gesture that says a lot about our state. “Carson is an Iowa State student and I applaud him for his creativity and his thoughtfulness of donating to our wonderful Stead Family Childrens’ Hospital,” Harreld says. “While we’re clearly very competitive on the field, he is clearly showing how collaborative all Iowans really are…and how we’re all in this together.” So thank you, Carson, thank you Iowa State, and Go Hawks.”

King says he was surprised his sign got on TV and then got so many responses afterwards. His fundraiser has gained national attention on social and other media.