You are here: Home / News / 232 traffic fatalities in Iowa so far this year 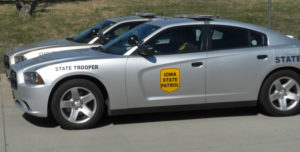 Officers from the Iowa State Patrol and the Iowa DOT’s motor vehicle enforcement division are joining deputies from sheriff’s departments in Lyon, Osceola and Sioux Counties to make traffic stops.

“They’re all going to working together to try to prevent and making sure people are wearing their seat belts,” said Trooper Alex Dinkla, a spokesman for the Iowa State Patrol.

Officers will be in marked and unmarked cars.

“The ultimate goal is to reduce traffic fatalities,” Dinkla said.

Two-hundred-32 people have died in traffic accidents so far this year.

Distracted driving is the leading cause of traffic fatalities in the United States. Weather and excessive speed are also cited as top factors in fatal crashes. An aircraft will be flying over the three northwest Iowa counties today to identify speeding vehicles.