You are here: Home / News / Economists: ‘We need a deal’ with China, USMCA ratification 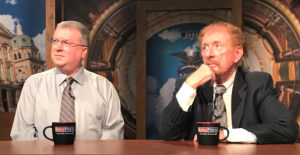 “When economics and politics collide, economics loses every time,” Goss says, “and it’s very concerning that this US economy is slowing down and potentially moving into a recession, so I think we need a deal.”

Goss says it appears to him both President Trump and China’s president are “blinking” and a resolution to the trade dispute may be near — particularly since China’s own pork supply is decimated by African Swine Fever and the country needs U.S. pork imports.

Iowa State University economist Chad Hart says the USMCA is the most important trade pact that must be resolved.

“When you think of China and the dispute there, it was $20-$25 billion of agricultural trade. The USMCA? Over $40 billion,” Hart says. “Canada and Mexico are our two very consistent, largest trading partners — not just in agriculture, but in all the products we have across the entire economy.”

Goss says “it’s unforgivable” for USMCA to be “languishing” in congress.

The two economists made their comments this morning during taping of the “Iowa Press” program that airs tonight on Iowa Public Television.