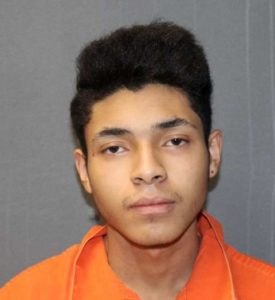 The stepmother of a Sioux City teenager who was stabbed to death in early 2018 was in court today to speak directly to the 19-year-old found guilty of murdering her daughter.

Tran Walker of Sioux City was found guilty in August of killing his ex-girlfriend and a friend who tried to intervene. He was sentenced today to spend the rest of his life in prison.

“To Felipe’s family, please know Felipe died a hero, our hero, and your loss is also our loss,” Stevie Sullivan said. “Other witnesses came to Paiten’s side as she took her last breath. It comforts our family to know complete strangers showed such love and compassion to Paiten. Thank you. You, too, are our heroes.”

Sullivan, the only member of either victim’s family to speak, then addressed Tran Walker.

Police say Walker, Sullivan and Negron were in a car when Walker became upset that Sullivan refused to start dating him again. He stabbed his ex-girlfriend 43 times. Negron suffered 17 stab wounds. Walker declined to speak at his sentencing.

Judge Tod Deck ordered Walker to pay $150,000 to each of his victim’s estates. A restitution hearing was set for next January 24.