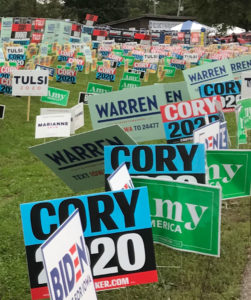 New Jersey Senator Cory Booker this morning said he’s being “brutally honest” with supporters and the public and will end his presidential campaign if he’s unable to raise at least $1.7 million in the next 10 days.

“My goal is to beat Donald Trump…but if we are not able to field a campaign to do that, I think that is detrimental to the Democratic Party to stay in something for a vanity exercise,” Booker told Radio Iowa and The Des Moines Register. “Right now we have a campaign that has been growing and is ready to strike and win, but without the resources in the fourth quarter, we can’t do that.”

A Booker campaign memo obtained by NBC News and then released by the campaign outlined what the senator told Radio Iowa set a “realistic” fundraising goal.

“This is exciting. This is the moment of test for our campaign and if people respond, we’ll be able to continue — not just here in Iowa,” Booker said. “I think we’ll win the nomination.”

Booker entered the 2020 race this past February and has nearly 50 paid campaign staff working in Iowa. He’s been endorsed by more state legislators than any other candidate in the race and today marks his 10th trip to the state.

“If we don’t raise that money, we will have to have a serious moment of introspection because this is not a vanity project for me. This is not an endeavor of ego,” Booker said in this morning’s interview. “I think every campaign should be having the same conversation: ‘Do you have a pathway to win?’ And if we can’t raise $1.7 million dollars, the campaign we built that is prepared to win, that pathway without the resources becomes quickly closed off.”

Booker plans to lay out the stakes for his campaign this afternoon when he addresses a crowd of thousands in Des Moines attending the Polk County Democrats Steak Fry.

Booker spoke late this morning with  Radio Iowa and Des Moines Register reporters before he addressed a crowd of supporters gathered in a grassy zone in Des Moines Water Works Park, preparing to march into the Steak Fry with Booker.

“This could possibly be one of our last interviews and I’ll tell you this right now, there has not been a time when all the candidates have come together in this campaign where we have not come out of the event with the independent observers saying we were among the best presentations,” Booker told the two Iowa-based reporters. “….I’m confident when we go on that (Steak Fry) stage….we have the right message.”