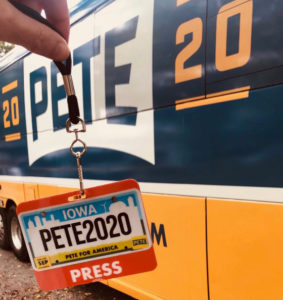 Democratic presidential candidate Pete Buttigieg is wrapping up a four-day tour of nine Iowa cities today and much of the journey between stops was spent answering reporters’ questions.

“I remember that it was impressive,” Buttigieg told Radio Iowa. “I remember friends of mine were really drawn to it, high schoolers who didn’t necessarily care about politics at all, folks who were more left, but intrigued by this Republican doing something that was different and I think it really endeared him to a whole new generation and really demonstrated a different approach to politics.”

Buttigieg said he’s been thinking about McCain’s always-on-the-record approach for a while.

“It’s never been done in the social media age,” he added.

And Buttigieg said it’s been a chance for him to show he “has a different style” as a candidate.

“Shake things up a little bit and make sure people see the alternatives in front of them,” Buttigieg said.

Buttigieg and his supporters made a statement of a different kind Saturday. A swarm of yellow shirts bearing the name “PETE” rallied in a Des Moines park Saturday morning, then they marched to the Polk County Democrats’ Steak Fry — a campaign investment in tickets and t-shirts designed to show Buttigieg is competitive. Buttigieg is using the cash in his campaign account to run ads in Iowa, open 20 campaign offices around the state and increase his paid staff here to more than 100.

“We’re definitely in a position to go the distance in this campaign,” Buttigieg said.