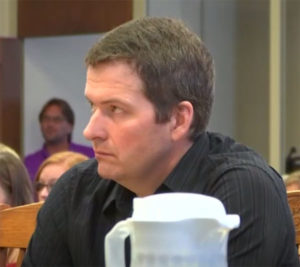 An Earlville farmer was found guilty by a Delaware County jury Monday of killing his wife with a corn rake.

KCRG TV was in the courtroom as the judge read the verdict to 43-year-old Todd Mullis.

“We the jury find the defendant Todd Michael Mullis guilty of murder in the first degree, signed by the foreperson,” the judge read.  Mullis rolled his eyes as the verdict was read.

Prosecutors had argued Mullis was angry about his wife Amy’s affair and that is why he killed her on November 10th of 2018. Mullis says Amy must have fallen on the corn rake — but the medical examiner testified during the trial that the rake had been pushed into Amy Mullis’ body twice and that is why she ruled the death a homicide.

The judge dismissed the jury after reading the verdict. The judge told Mullis he has the right to file for a new trial and says the law does not allow him to be released on bail pending his sentencing.

The judge said he would work with the attorneys to set a sentencing date, where Mullis will face a mandatory life sentence.