You are here: Home / Fires/Accidents/Disasters / Missouri River could drop below flood stage by Saturday 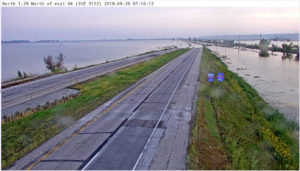 DOT camera image of flooded I-29.

Forecasters say the latest round of flooding along the Missouri River will slowly start to subside over the next few days.

The river crested at Omaha/Council Bluffs on Monday and it’s expected to fall below minor flood stage there by Saturday. National Weather Service hydrologist David Pearson says scientists will be watching the river closely. “Another heavy rain event could cause another rise and until the reservoirs really come down, we’re going to be dealing with this for a while,” Pearson says.

The U.S. Army Corps of Engineers is releasing extra water from upstream dams on the Missouri to make room for flood control storage, so Pearson says the river will remain very vulnerable to flooding. “We’ve got a while until we can really rest easy because the river is going to be high the next two months,” Pearson says. “Another big heavy rain upstream will cause another big rise and we just have to be vigilant for that.”

The Iowa Department of Transportation reopened southbound Interstate-29 from Crescent to Council Bluffs this morning. It was closed last week due to flooding. Northbound I-29 from Loveland to Council Bluffs remains closed, along with parts of I-680.