You are here: Home / Outdoors / You can see eagles, hawks, pelicans at weekend Hawk Watch 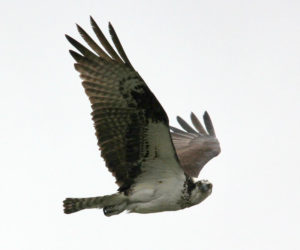 The osprey is one of many migrating birds that may be seen on Sunday.

A “hawk watch” event is planned this weekend that has nothing to do with college football.

Marlene Ehresman, executive director of the Iowa Wildlife Center, says the annual High Trestle Hawk Watch often attracts several hundred bird watchers of all ages and skill levels. Ehresman says, “We just have a very informal event where people can come out to the viewing deck on the High Trestle Trail and join wildlife biologists and ornithologists and expert birders to view the migrating raptors.”

The overlook at the 13-story High Trestle Trail Bridge offers an excellent place to watch for all sorts of feathered creatures, from songbirds to bald eagles to pelicans. “They use the Des Moines River as another sort of migration corridor on their way south or north,” Ehresman says. “It’s a really good vantage point for us humans to start learning how to identify these soaring birds and learn a little about their natural history as we do that.”

The various species and numbers of birds will be tracked. Ehresman says the goal of the event is to teach people about migration, how to identify migrating birds, and how to tally the various species of raptors. Each event is different and last year’s Hawk Watch included an unusual treat.

“We saw over 200 turkey vultures that flew right over our heads,” Ehresman says. “It was a lot of fun just to be witness to that and if it’s a nice, clear day, we’ve often seen peregrine falcons migrating and Cooper’s hawks and all sorts of broadwing hawks.”

The free event runs from 10 a.m. to 4 p.m. on Sunday. The paved High Trestle Trail runs 25 miles from Ankeny to Woodward in central Iowa — through Boone, Dallas, Polk and Story counties.