You are here: Home / News / Governor seeks policy for paid time-off for state workers who volunteer 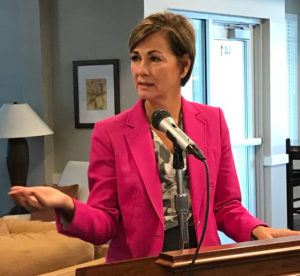 Governor Kim Reynolds has directed a key state agency to draft a new policy for state employees who volunteer outside of state government during the workday.

“It’s important to me to encourage our hardworking state employees to participate in volunteer activities similar to other employees across Iowa with volunteer policies,” Reynolds said Tuesday.

The governor told reporters it may start small, granting up to eight hours of paid time off a year for state workers who volunteer.

“According to the Society of Human Resource Management, 26% of US employers offer paid time off for volunteering,” Reynolds said, “and studies show that it not only boosts employee engagement and morale, but it also increases productivity, recruitment and retention — and the bottom line as well.”

Policies about volunteerism among public sector workers in OTHER states vary wide. State workers in North Carolina, for example, may take up to 24 hours of paid community service time each year. Massachusetts gives state employees up to 15 paid days off each year to serve as a Red Cross volunteer in a disaster zone.

Reynolds and her staff are planning to volunteer at the Ronald McDonald House near a Des Moines hospital to show the governor’s commitment to volunteering.

According to the U.S. Bureau of Labor Statistics, the percentage of Americans who volunteer has declined in the past 15 years. About one-in-four Americans did some sort of volunteer work last year.