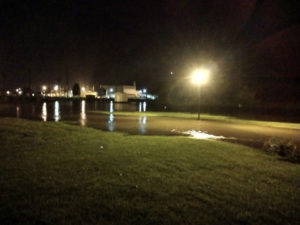 Residents and businesses in the northwest Iowa community of Swea City are cleaning up today after severe thunderstorms pushed through Tuesday evening. There were no injuries, but there is extensive damage.

Dave Penton, the Emergency Management Coordinator for Kossuth County, says although there were multiple reports of funnel clouds in the area, the damage is not believed to have been caused by a tornado.

“We’re conducting drone flights now, to see if we can detect a path,” Penton says. “We’re unable to do that…and it’s such a broad, broad path that, at this time, we’re thinking it was straight line winds,” Penton says.

Penton has consulted with the National Weather Service as well.

“We have a pretty good gauge of the winds up here. We’ve got a communication tower on the fire station here that has rated the same winds of 90 plus miles an hour and that tower was damaged,” Penton says, “so we’re confident that we did have 90 plus mile-an-hour winds and the Weather Service is with us on that.”

There have been reports of damage to vehicles and the roofs and siding of homes in Swea City, but Penton says the primary clean-up is centered around large trees that were toppled by the storm.

“We do have a lot of heavy equipment operating in the city today, chain saws and things of that sort,” Penton says. “We request that we limit that ‘Lookie Lous’ that are traveling through the city. We do have a strong law enforcement presense up here and we will be fining for access to restricted area.”

In addition to ticketing storm damage tourists, tree services coming into Swea City must go to City Hall and get a permit. Severe thunderstorms also moved through Buena Vista, Cherokee, Emmet, Palo Alto and Pocahontas Counties Tuesday evening, but no significant damage has been reported in those areas.

There was also severe weather in southwest Iowa. The evening started with large hail reported in Harrison County around 6 p.m.

Funnel clouds and a possible tornado were spotted in Harrison and Shelby counties. One-inch diameter hail was reported in the Panama area, as was 1.25-inch hail near Neola and 1.75-inch diameter hail near Avoca. Flash flooding then followed and many intersections and roads were flooded throughout Atlantic. Some flooding of homes and businesses was reported throughout the area.

Numerous trees and tree limbs were down. Some power issues were noted in a few locations due to lightning. Standing water is still an issue in many areas and some roadways may have been impacted by storm water, so area residents are urged to use caution while traveling.