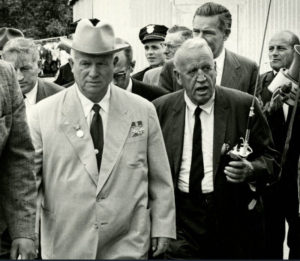 Sixty years ago this week, Soviet Premier Nikita Khrushchev made his historic visit to the western Iowa farm of Roswell and Elizabeth Garst.

To mark the occasion, the Whiterock Conservancy is hosting a daylong celebration Saturday on the lawn of the restored Garst farmhouse in Coon Rapids.

Daniel Gudahl, executive director of the conservancy, says Khrushchev’s visit was unprecedented and signaled a huge turning point in relations between the U.S. and the U.S.S.R. “That was a big deal because that was the height of the Cold War and people didn’t like Communists at that time, especially,” Gudahl says. “We’re celebrating that visit and all of the work that Roswell Garst did to promote what we call peace through corn.”

Recent renovations to the Garst farmhouse earned it the “Best Rural Preservation Project” from Preservation Iowa. Saturday morning, there will be tours of the house and grounds and a luncheon that includes local produce. “In the afternoon, we have a statue that’s going to be unveiled,” Gudahl says. “It’s called ‘Let Us Beat Our Swords Into Plowshares’ and it’s a copy of a statue that’s at the United Nations that was done by a famous Russian sculptor.”

The afternoon’s events will also include a talk by a presidential historian and tours of the farm, as well as what’s billed as a sustainable agricultural tour. Gudahl says it’s vital that people learn about and remember such a significant event as Khrushchev’s 1959 visit to an Iowa farm.

“We had a class come out from Iowa State last year. We were at the home farm and I asked how many knew who Nikita Khrushchev was. There were about 25 in the group and nobody raised their hand. Certainly, it is important that people understand the history of the Cold War and the relations we had with the Soviet Union.”

Garst, a seed corn pioneer, forged an unlikely friendship with Khrushchev, based on their mutual interest in agricultural technology and in growing food for hungry people.