You are here: Home / Education / National Blue Ribbon status given to 4 Iowa schools 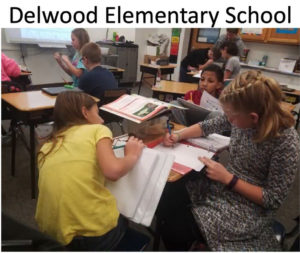 Delwood Elementary in Delmar is one of the Blue Ribbon Schools.

Iowa Department of Education spokesperson, Staci Hupp, says 362 schools were recognized nationwide.”It’s a program that honors elementary, middle and high schools — both public and private — for overall academic excellence, or for closing gaps in achievement among groups of students,” Hupp says. She says there are several areas where schools can improve achievement gaps.

“These include students from low-income backgrounds, students from different racial an ethnic backgrounds. Student who do not speak English as their native language, students in special education. That’s generally what that includes,” according toe Hupp.

She says the Iowa districts at nominated by the department’s director. “This is a really a fantastic award,” Hupp says “It’s truly a testament to the hard work and commitment to the educators and administrators in these schools.”

Representatives of the four Iowa schools will get to join those from others states in a celebration in Washington, D.C.
Hupp says the U.S. Secretary of Education will be there to recognized them. “And this is really a big deal for these schools.” The national ceremony is on November 14th and 15th.