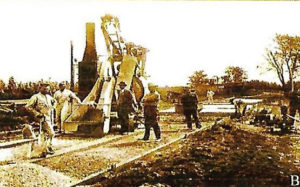 Some Iowa roads only last a winter or two before they’re pockmarked with potholes, but a celebration today  in southeast Iowa’s Louisa County is being held on an original road built in 1914.

Tom Woodruff of Coralville is spearheading the event to honor the short but durable stretch of pavement that passes through the town of Fredonia. 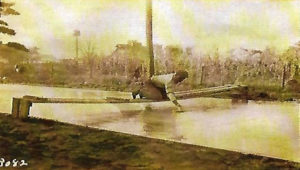 Finishing the cement on the “Convict Road.”

“Exactly one and three-eighths of a mile long and the road is about 14 feet wide,” Woodruff says, “and still in pretty good shape.”

Known locally as Convict Road, the sturdy avenue was built more than a century ago, mostly by inmates from what was then called the Anamosa Men’s Reformatory. The project was supervised by the newly-formed Iowa Department of Transportation.

While a few Iowa cities had concrete streets then, it was very rare for a rural road to be paved.  “The concrete varies from six to eight inches,” Woodruff says. “They used some pretty interesting techniques on it with rolled river stone. They put in expansion joints, some of the earliest in concrete and they did it about right. They designed it very well, and on a sand base that held up well.” 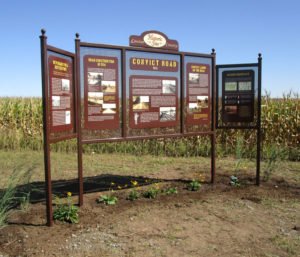 Historical marker for the road.

The celebration will feature several century-old cars, or “horseless carriages,” which will assemble at the fairgrounds in Columbus Junction for a parade starting around noon.

“We’ll take our dignitaries, which is the head of the Iowa DOT and the head of Prison Industries in Iowa and local politicians and mayors, we’ll load them in the cars after a brief program,” Woodruff says. “We’ll drive the old road and have a big ribbon cutting in front of a beautiful sign that’s been erected there telling the story.” Historic and directional signage has also been installed along the 105-year-old roadway. Woodruff says it’s important to remember who built the byway so long ago.

“It tells a big story, too, socially about how we want to rehab people, giving them work and letting them pay their debt,” Woodruff says. “And the fact that a small community can come together and get things done. We’re pretty excited knowing that part of our history.”

Convict Road is just east of Columbus Junction and north of Iowa Highway 92.