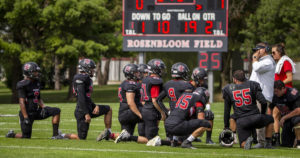 Athletic Director Any Hamilton says the squad only had 28 healthy players for this week’s game at St. Norbert. “We knew what we needed to do based on our injury report coming out of last weekend,” according to Hamilton. “So, it’s not an easy story and an easy position to take. However, we feel like we’are taking the right position by canceling the season. The position of caring for the health and safety of our current football players.”

Hamilton says they were concerned about further injury playing with such a limited roster. “We didn’t have substitutes at many positions. And the fatigue on those starters was going to be fairly extreme. It has been for the last couple of years,” he says. “And we made the determination really on not being able to put adequate numbers on the field for the St. Norbert game.”

Hamnilton says their plan is to bring the program back for next season. There are five seniors on the squad. “We also obviously need to recruit a group of players to get our program back into the high 40s or even into the high 50s. That is our goal right now,” Hamilton says.

The team started the season 0-3 and will forfeit the remaining 7 games.