You are here: Home / News / Deadline for REAL ID driver’s license now one year away

This is a sample of the REAL ID license.

Tuesday marked the one-year countdown to the federal regulation that requires you to have your driver’s license certified as a “REAl ID” to be able to use it as identification for flying.

Iowa DOT Director Mark Lowe says the requirement came out of rules developed at the 9-11 terrorist attacks. “What they did for states was establish common standards that apply to all states to help protect against identify theft and fraud,” Lowe says. “And those standards really went to the things like the systems, materials and machines we use to make sure the licenses and ID’s are secure. The physical cards themselves are secure and resistant to alteration and counterfeiting. That we have secure and accurate processes for identifying people who apply for licenses and IDs.”

You can tell if your driver’s license is a REAL ID by looking into the right corner and seeing if it has a gold star there. “If you don’t have a REAL ID marked license or ID on or after October one 2020 — you have to show a federally accepted form of ID like a passport or military ID card,” according to Lowe. 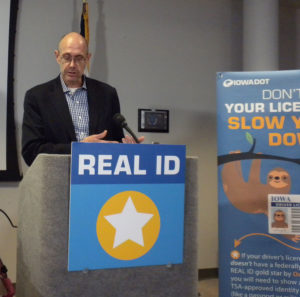 He says there won’t be any exceptions once the deadline is here. “You will be denied access and won’t be allowed to fly if you don’t either have a REAL ID marked license or ID or another accepted form of federal identification,” Lowe says.

You will need bring documents to the driver’s license office that prove your identity to get your license approved for REAL ID.
“You can always get one whenever you renew your license. If you do it when you renew, there is no additional cost to do so,” Lowe explains. “One thing we like to point out is if you are due to renew before October one 2020, you don’t need to rush in, you can just come in at that time and bring the necessary documents. But if you are not due to renew you can also come in at any time and get what we call a duplicate license that is marked for REAL ID.”

Lowe says with eight-year licenses many people may not be due to come to renew licenses before the deadline next year and should find time to get a REAL ID. If you already have the gold star on your license then you are set. “If you look at your license and it’s got that gold star marking on it — then you don’t have to do that again. Once we put your through that process and you’ve got that, you will continue to maintain that as you renew and replace your license over time,” he says.

Lowe says around 36% of Iowans with licenses already have gotten the REAL ID upgrade. He isn’t sure where we stand in comparison to other states for getting people switched to the REAL ID. He says there has been a lot of range of when states got started with the REAL ID and Iowa was one of the early ones in 2013. Lowe says Oregon won’t get started until next July. You will also need a real ID to get into federal buildings after the October 2020 deadline.

You can see the list of documents you need to bring with you for a real ID on the DOT’s website.