You are here: Home / Fires/Accidents/Disasters / Heavy rains cause Maquoketa River to flood Main Street in Manchester 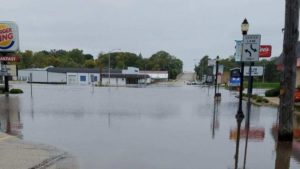 The City of Manchester recorded rainfall amounts between three and four inches in the past 24 hours and that has caused the Maquoketa River to spill out of its banks.

The water is covering West Main Street — but City Manager Tim Vick is hoping they’ve hit the high point. “The National Weather Service has us projected at 20 feet. I am hoping it’s not right. I am hoping it will be under that,” Vick says.

The noon hour measurement saw the river at 18.5 feet — 4.5 feet above the 14-foot flood stage. Vick says it will take some time for the water to go back down so the street crews can get in and clean things up. Vick says another round of rain won’t help.
“Our big concern again is how much rain we get tonight. That’s just going to delay things if that much rain,” he says.

Vick says the water on Main Street is mostly a nuisance at this point. He says the stores are still open downtown, but traffic is a problem and he recommends that people park on the side streets. “Please come down and visit our stores.” One Manchester resident reported getting 6.5 inches of rain.

The flooding is a replay of the flash flooding the city saw last year on October 1st and 2nd.