You are here: Home / Fires/Accidents/Disasters / B-17 which crashed in Connecticut was in Waterloo this summer 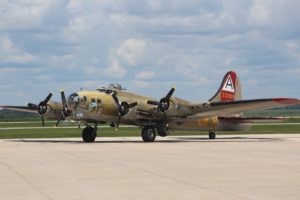 B-17 Flying Fortress at the Waterloo Airport in July.

A World War Two-era military plane that crashed in Connecticut Wednesday, killing seven people and injuring seven others, was on display in northeast Iowa this summer.

The B-17 Flying Fortress came to the Waterloo Regional Airport in late July as part of the Wings of Freedom Tour, a mobile educational exhibit that’s been touring the nation since 1989.

Connecticut authorities say 13 people were on board the historic four-engine, propeller-driven plane when it slammed into a maintenance building and burst into flames at a Hartford-area airport.

According to multiple reports, the vintage plane struggled to get airborne while taking off and went down as pilots were circling back for an emergency landing. The cause of the crash is under investigation.