You are here: Home / Agriculture / Farmers and ranchers gather in Omaha to protest cattle prices 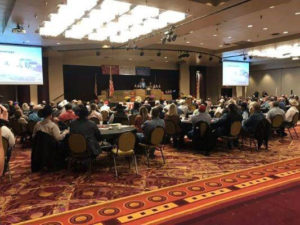 Nearly 400 farmers and ranchers gathered in Omaha Wednesday for a rally to protest low cattle prices and high profits for beef processors.

Organizers say meat packers are manipulating the cattle markets and the Trump Administration must take action.

Chris Petersen, a hog farmer from Clear Lake, was among those who spoke.

“Fight like hell!” Petersen said. “It’s our culture. It’s our future. Do the consumers of this country want corporate controlled agriculture feeding them or family-farm agriculture?”

Petersen said there are few independent pork producers like him left after packers started owning the hog barns and the pigs inside — and hiring farmers to do the work.

“Don’t let that happen to your cattle guys. Don’t,” Petersen said. “They done it the chickens. They done it to the pigs. Now they’re after the cattle.”

Another speaker compared the cattle market to “fantasy football” — saying cattle prices aren’t real. Rally-goers also are pressing the Trump Administration to reinstate “country-of-origin” labeling so consumers know if they’re buying beef from US producers or beef that’s been shipped in from another country.

According to the latest federal data, there were roughly 25,000 cattle operations in Iowa in 2017 and, on January 1 st of 2019, there were nearly four million head of cattle on feed or in the pasture.