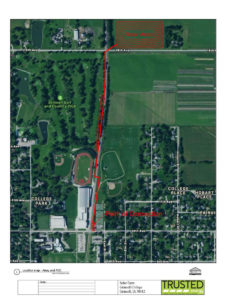 A map of the proposed project.

Grinnell College has signed an agreement to buy solar generated power to provide around 30 percent of its electricity needs on campus.

The cochair of the schools’s Sustainability Committee, Chris Bair, says Trusted Energy is building the solar array on 30 acres of nearby farmland. He says they will develop around 4 megawatts of solar power that will be attached to their electric meter and they have signed a 20-year contract to buy the electricity.

Bair says having someone else build the solar array is the best way for a non-profit like Grinnell College to proceed.  “We don’t pay taxes and an awful lot of the financial incentives for renewable energy right now are tax incentives,” according to Bair. “And so, that’s not something we can easily take advantage of. But this way a third party can take advantage of that and then sell us the power. We get the power and they reap the tax incentives.”

The agreement is expected to save the college approximately $3 million in electricity costs over 20 years. And it is projected to reduce the yearly carbon footprint of the campus by 18 percent. Bair says it’s the first major solar project for Grinnell College. “We’ve done some smaller solar installations ourselves — nothing of this size — largely on properties that we own off of our main campus,” Bair says.

He says the project will consist of 10,296 solar panels linked to a single axis tracker that will rotate the panels from east to west each day to better follow the sun. Construction of the solar installation will begin as soon as crops are harvested on farmland. The project is scheduled to start generating electricity for the college during the first quarter of 2020.

The University of Iowa is looking at a similar arrangement on a much larger scale for all the utilities on its campus in Iowa City.