You are here: Home / Health / Medicine / Suicides among men much higher than women in Iowa 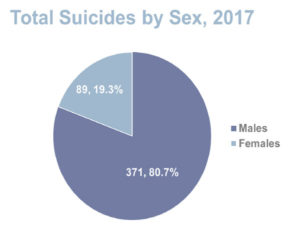 The Iowa Department of Public Health has released a new report which gives a more in depth look at violent deaths in Iowa.

Pat McGovern is the suicide prevention director for DPH. “We we characterize as a violent death is a homicide, suicide, unintentional firearm death, legal intervention and deaths that are kind of undetermined intent. Putting it another way — anything that is not a natural cause — you know — heart attack, cancer, something like that, McGovern says.

McGovern says men often use a gun when attempting suicide and that is why those attempts often end up being lethal. The report shows the largest proportion of suicide deaths were people aged 25-64.  “One of the reasons why we put reports out like this it to show this really is a life-span thing, it really is an Iowa thing. It’s a national and international issue. It doesn’t just affect young people. It doesn’t just affect men or women or a certain religion or socio-economic status, ” he says. “Suicide doesn’t discriminate. It can affect and has touched many Iowans.”

The report breaks things down a little more to show problems with intimate partners were noted as a contributing circumstance most often among young adults. Physical health problems were noted as a circumstance of suicide more often as age increased.
“This does seem kind of intuitive — that the older you get the more health issue we have and we have to thing about it — it just make sense,” McGovern says. “This give us some actual numbers to put behind it to say ‘okay’ our intuition here was spot on, we are on the right path.”

McGovern says it’s easy to boil things down, but he says suicide is more complicated than simple numbers and there is almost always more than one factor involved. “It’s really a constellation of events most often, not just that one thing. And so having those factors that contribute can help us see and help us tell that story better. And it also shows that there’s not a quick fix for that suicide issue that we are facing here in Iowa or nationally,” McGovern.

He says there is help available by contacting Your Life Iowa. “That’s a resource for anyone who is thinking about suicide themselves or is concerned about someone else. I’am really concerned about my spouse, my co-worker my teammate and I don’t know how to asks. Or what if they say yes,” McGovern says.

He says the aide is available to anyone who needs it. “Contacting Your Life Iowa is free and confidential so you don’t have to worry will my insurance cover it? Or will my parents or my boss find out I called?,” McGovern explains.
The service is available 24/7 through live chat at yourlifeiowa.org/suicide — or by calling 855-581-8111 or by texting 855-895-8398.