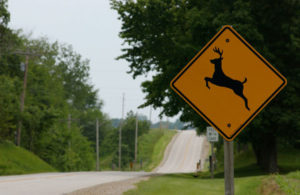 With the cool, crisp weather of October comes the increased risk of hitting an animal with your car.

Iowa drivers rank fifth in the U.S. for the most animal collisions, according to the state’s largest auto insurer. Kelly Pargett, a spokeswoman for State Farm, says the company’s study finds 58% of the animals Iowans hit are deer.

“The other animals that follow closely behind are dogs and cats,” Pargett says. “Farm animals for this part of the country were high, and then large rodents, including rats, were high in our claim count.” Iowa drivers have a one-in-55 chance of colliding with an animal, according to the report, and repairs can be very expensive.

“They range a lot, depending on how large the animal is and how severe the collision is,” Pargett says, “but anything from a couple hundred dollars to thousands of dollars.” The report says most animal-related crashes occur during October, November and December.

The oft-repeated Iowa DOT motto is: “Don’t veer for deer,” as steering away from an animal could put you in the ditch or into oncoming traffic. Pargett says to watch your speed, buckle up and be vigilant, especially from dusk onward. “At night is most dangerous, and they’re swerving, so some of the tips are do not swerve,” Pargett says, “and be cautious when you’re driving through the areas where they do have the deer signs.”

The most dangerous state for animal collisions is West Virginia, followed by Montana, Pennsylvania and South Dakota. The state with the lowest risk? Hawaii.