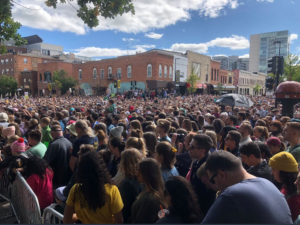 Greta Thunberg, the 16-year-old from Sweden who spoke at the United Nations’ Climate Action Summit, spoke at the rally. She praised the Iowa City area students who’ve been striking weekly to call attention to the issue.

“So many people gathering here on a weekday with such a short notice. This is real hope to me,” she said, to cheers.

Area students who’ve been prodding University of Iowa and Iowa City officials to act with weekly protests spoke to the crowd as well. Shoshie Hemley, a 16-year-old student at Iowa City High, said governments and corporations need to change.

“Being aware of climate change simply isn’t enough. This is a crisis, an emergency and we don’t have time,” she said. “Solving climate change will take an entire societal upheaval.”

Iowa City students have pushed the city council and school board to take more aggressive action on climate-related issues chanted “no more excuses.” They cited Thunberg — who sparked student-led walk-outs in Europe — as their inspiration. Thunberg said the world is waking up to the message.

“We teenagers and children shouldn’t have to take the responsibility, but right now the world leaders keep acting like children and somebody needs to be the adult in the room,” she said, to cheers.

The Iowa City climate strikers are trying to get University of Iowa and Iowa City officials to adopt the goal of having the campus and entire city run on 100 percent renewable energy by 2030.