You are here: Home / Agriculture / Klobuchar says Trump’s ‘vague promise’ on biofuels is too little, too late 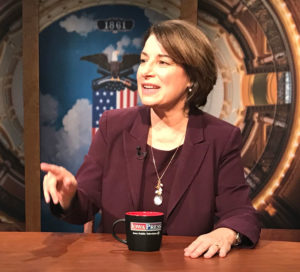 Minnesota Senator and Democratic presidential candidate Amy Klobuchar today said President Trump should not get credit for offering “a vague promise to undo the damage” his administration’s oil industry waivers have done to the biofuels industry.

“To me, it’s too little, too late,” Klobuchar said late this morning.

Two northwest Iowa ethanol plants and a biodiesel plant in southeast Iowa stopped production after the EPA waivers were granted. Klobuchar said rural economies across the Midwest were damaged when the Renewable Fuels Standard wasn’t followed and oil refineries were exempted from the requirement of adding ethanol to gasoline.

“They’ve already lost four billion gallons of ethanol toward the standard across this country,” Klobuchar said.

“Oil has been having their way for way too long,” Klobuchar said. “I would stop the subsidies on ‘big oil’ that make it very unfair and then I would also make sure we have incentives in place to move to cellulosic and other forms of ethanol.”

The “hardship” waiver process for small refineries must be greatly reduced as well, according to Klobuchar.

“It’s supposed to be just for a handful every year and make it transparent,” Klobuchar said, “so people know who is getting the waivers, instead of us finding out — Senator Grassley and I, after the fact — that it’s Exxon and Chevron.”

Klobuchar made her comments today during taping of the “Iowa Press” program that airs tonight on Iowa Public Television. Klobuchar is touring a biorefinery in Newton this afternoon and hosting a round table about renewable fuels policy. On Thursday morning, Klobuchar and Democratic Congresswoman Cindy Axne visited Southwest Renewable Energy in Council Bluffs and both called for the U.S. Department of Agriculture to issue a report on the economic impact of the biofuel waivers.