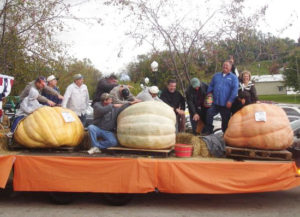 Katie Gombert says the pumpkin weigh-off was started in 1989 to remember her brother after he died. She says her uncle Tom had been growing giant pumpkins and came up with the idea to start the weigh off. Gombert says the event just kept growing every year.

“In ’93 we were named the pumpkin capital of Iowa and the Anamosa Chamber joined soon after and then we became the Anamosa Pumpkinfest and Ryan Norlin Giant Pumpkin Weigh-off,” she explains.

More than $11,000 in prizes are given away in the Ryan Norlin Giant Pumpkin Weigh-off. You can enter or check it all out this Saturday from 8 to noon at the Lawrence Community Center for a two-dollar admission. While the giant pumpkins are the main draw there are also lots of other Pumpkinfest activities taking place on Main Street throughout the day Saturday.

This year’s theme is “Save the Pumpkins” in honor of Breast Cancer Awareness Month. You can find more information about Anamosa Pumpkinfest online at anamosachamber.org.