You are here: Home / News / Harris does not use word ‘impeachment’ in Ames appearance 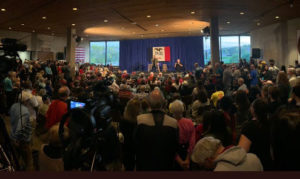 But during an appearance  tonight in Ames Harris did not directly suggest impeachment as the means for forcing Trump’s exit from the White House. Harris did not mention the impeachment inquiry in the U.S. House or President Trump’s phone call with Ukraine’s president either — but the crowd erupted in laughter and cheers when she made a passing reference to Trump’s remarks this week about that phone call.

“My background is as a prosecutor and I’m going to tell you something. I can recognize a confession when I see one,” Harris said, laughing along with the crowd.

Harris accused Trump of taking the word of authoritarian leaders in Russia, North Korea and Saudi Arabia rather than the professionals the U.S. intelligence community.

“Sold out our country and our nation’s security,” Harris said.

Harris’ appearance in Ames is part of her retooled campaign effort in Iowa. Mary Johnson of Ames was there with her twin granddaughters to learn more.

“I know that she’s from the west coast…but I don’t know a lot about her,” Johnson said. “I like all the candidates probably for the same reason — because they’re running against Donald Trump.”

“She’s talked about like gun control a lot and that’s something that is like pretty close to my heart and so she is one of the candidates who’s talked the most about it and I really like that about her,” Annika Rice said. Her sister, Kaija Rice, continued: “I agree with pretty much everything she said. Gun violence is also like a topic that I’m concerned a lot about and I like how passionate Kamala has been about the topic.”

The twins are Ames High juniors. They’ll be eligible to participate in the February 3rd Iowa Caucuses — when they’re still 17 — because they will turn 18 before Election Day, which will be November 3rd of 2020.