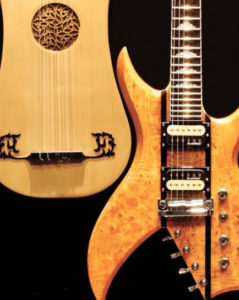 Lovers of guitars, music, woodworking and history will want to see (and hear) an exhibition  now open in eastern Iowa.

“Medieval to Metal” is a collection of stringed instruments from the National Guitar Museum in Orlando. Jeff Miller, vice president of the National Czech and Slovak Museum and Library in Cedar Rapids, says it’s the traveling exhibit’s first-ever Iowa appearance.

“What the exhibit is…is 40 different guitars. Some are guitars like you and I see today and some are hundreds of years old,” Miller says. “There’s huge guitars, one is six feet tall. One is very small, an electric guitar that’s all made of metal.”

The exhibit also includes an array of 30 photos and album covers featuring pop culture figures and their instruments — everyone from B.B. King to Pete Townshend. There are familiar, modern electric and acoustic six-string guitars as well as other ancestors — like lutes — that are centuries old.

Some people have asked Miller why the National Czech and Slovak Museum is the right venue for an exhibit of this sort. He answers by pointing to a type of “resonator” guitar.

“Some people know the word ‘dobro’ and where that word came from actually is the Dopyera brothers, so, Dopyera brothers equals dobro,” Miller says. “These brothers came here in the early 1900s from Slovakia and they created some of these oldest instruments, and we’re talking instruments that are hundreds of years old.”

Visitors will also be able to pick up and play acoustic and electric guitars. The exhibit runs through January and multiple concerts are planned at the museum to highlight guitar music from acoustic to rock-and-roll to funk.