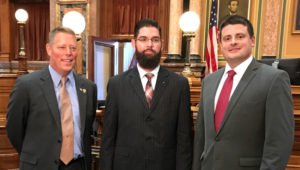 Pat Grassley — the 36-year-old grandson of U.S. Senator Chuck Grassley — is the new GOP leader in the Iowa House of Representatives. The 53 Republicans who serve in the House met this  morning to elect a new speaker.

“Talked with almost every single member as I walked out the door and I think we’re all the same page that we’re ready to get back into session and move forward a strong, conservative agenda for House Republicans,” Grassley told reporters in a news conference held on the House floor.

Grassley’s new title is House Speaker-select until he’s elected speaker by the full House when the legislature convenes in January. Grassley’s grandfather served 16 years in the Iowa House before winning a seat in the U.S. House of Representatives in 1974.

“There is this conspiracy theory that I have been groomed since the beginning of time to take Chuck Grassley’s seat,” Grassley said. “…A lot of the conversations that we have are really more about just grandfather and grandson things. He’s more than happy to answer questions…from me to him and give me advice, but his advice — and he knows this — is not to tell me what I am or am not going to do.”

Grassley told reporters he asked his grandfather not to lobby his colleagues to elect him speaker. The Speaker-select says his grandfather’s 99-county tour is an example of how politicians should make themselves available to voters.

“I think anyone running for office in Iowa has learned — whether it’s presidential candidates, governor or senate — is that you’re out there, you’re available for your constituents and you listen,” Grassley said.

Grassley told reporters it’s too early to say what the House GOP’s top agenda items will be in 2020.

“We’re going to come up with good, common sense legislation that we think moves Iowa forward and we’ll continue to have those conversations, as we do year-round,” Grassley said.

The House GOP has elected a new Majority Leader as well. Thirty-five-year-old Matt Windschitl of Missouri Valley will manage debate on the House floor and he, too, indicates the 2020 agenda is still under development.

“Leadership is about listening, listening to those members that have been out in their communities, talking to their constituents and what ideas and policies they want to see move forward, so I would hope that we could move things in a timely fashion and get the job done in an adequate amount of time for Iowans and for legislators who need to get back out in the field and plant their crops or back to their regular family life,” Windschitl said, “but beyond that, I can’t give you a solid prediction as to what the flow or topics would be.”

Windschitl, like Grassley, was first elected to the Iowa House 13 years ago.

Representative John Wills of Spirit Lake today was elected by his Republican peers to be the third-ranking leader in the House — with the title of Speaker Pro Tempore.

“I think that we all bring very different abilities and talents to the table, but we’re also very similar as well,” Wills said, “so I’m very excited about that and so I’m looking froward to working with these two gentlemen, forming a very cohesive team.”

The leadership change was sparked by Linda Upmeyer’s decision not to seek reelection to the House in 2020. She stepped aside to let someone else manage the House for a year and be in charge of House races in 2020.

Speaker-select Grassley told reporters he will not celebrate his new role in the way his grandfather would, as he’s “not nearly as big a Dairy Queen fan” as Senator Grassley is.