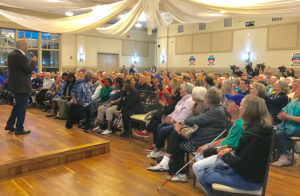 Democratic presidential candidate Cory Booker tonight said President Trump’s actions are veering into “absurdity” — but Booker did not mention impeachment during a campaign event in West Des Moines until a man in the crowd directly asked Booker to “say a few words about the ‘I’ word.”

At the end of a nearly five-minute-long answer, Booker said: “I fully support Nancy Pelosi’s decision to start an impeachment inquiry because the public has a right to know.”

Booker told the crowd as a U.S. Senator representing New Jersey he took an oath to protect and defend the Constitution and the Constitution gives congress the responsibility, he said, to provide oversight of the executive branch.

“If somebody in that office does something to violate their oath, then congress an obligation to investigate that,” Booker said.

Booker later told reporters it’s the second time in three days that someone in Iowa has asked him about impeachment.

“I really do believe the biggest issues people are concerned with are health care issues or economic issues or issues relating to mental health care or to climate change,” Booker said.

Trump earlier today informed the U.S. House no members of his administration will testify and the executive branch will not comply with any subpoenas for information. Booker said congress can go to court to force the president to comply.

“But it’s a very dangerous thing when the president of the United States says he’s not subject to the checks and balances as proscribed by the Constitution,” Booker told reporters,” so we are in a very dangerous period, but I do believe that, ultimately, we will be able to hold him accountable.”

Booker is a member of the Judiciary and Foreign Relations Committees in the U.S. Senate. Both panels may be directly involved in the investigation surrounding President Trump’s call with Ukraine’s president.