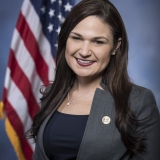 Iowa Congressman Abby Finkenauer, a Democrat from Dubuque, emphasized infrastructure needs in the district Monday and answered questions about impeachment.

Finkenauer toured aging bridges and held a roundtable discussion in Cedar Rapids with the Oregon congressman who’s chairman of the Transportation and Infrastructure Committee in the U.S. House.

Finkenauer said she hopes impeachment won’t sideline discussions on issues like finding the money to repave roads, repair bridges and renovate the locks and dams on the Mississippi, but Finkenauer told reporters she was elected to defend the Constitution.

“I’m not worried about electoral politics. I’m worried about defending our democracy, as we all should be,” Finkenauer said. “This isn’t a Democratic or Republican issue. This is about the future of our country and making sure that we have folks following the law and standing up to the office that they hold.”

Finkenauer faces a competitive re-election campaign heading in to 2020 and media outlets rate the district as a “toss-up” or as leaning slightly Democratic.

Finkenauer is in the middle of her first term in the U.S. House. She defeated two-term Republican Congressman Rod Blum of Dubuque in the 2018 election.