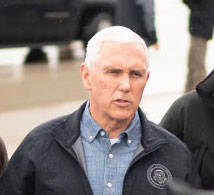 Mike Pence during an Iowa flood tour in March.

Vice President Mike Pence will visit a central Iowa farm this afternoon, part of the Trump Administration’s effort to pressure congress to ratify the U.S.-Mexico-Canada Agreement.

Angela Hofmann of “Farmers for Free Trade” says farmers across the country are hoping the trade war with China is close to being resolved, too. “It’s time to calm things down,” Hofmann says. “Really optimistic about trying to bring a deal together. I applaud the administration for trying to resolve these difficult trade issues with our trading partners and then get Iowans back in the business of selling their products around the world.”

According to data from a group called Americans for Free Trade, Iowa farmers and businesses have faced $343 million in retaliatory tariffs since the trade war began in February of 2018.

“Some of the good news is we’re in the process of passing this USMCA in the very near future and so that resolves a number of the issues with steel and aluminum tariffs that were recently removed,” Hofmann says.

Negotiators from the U.S. and China are scheduled to meet in Washington tomorrow. Media reports this morning indicate China is open to a “partial” trade deal that includes a promise to buy U.S. agricultural commodities. Hofmann says in her travels through Iowa, the number one concern she’s heard from farmers is about the loss of access to China’s markets.

“The Brazlians, Argentines, Australians, Canadians — they’re quickly making a move into those markets,” Hofmann says, “and while we’ve not been seen as a reliable supplier, the more this goes on, the longer this goes on, the less likely it is we’re going to be able to regain that strong foothold in Asia some of our key export markets.”

Vice President Pence is set to speak later this afternoon on a farm near
Waukee about the USMCA and he’ll be joined by Iowa’s top three Republican elected officials: Governor Kim Reynolds and U.S. Senators Chuck Grassley and Joni Ernst.