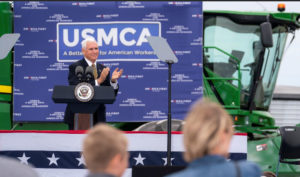 Vice President Mike Pence told reporters during his trip to Iowa today that he has “no objection” to releasing transcripts of his own calls with Ukraine’s president.

A whistleblower’s report about President Trump’s phone call with Ukraine’s president is what sparked the impeachment inquiry underway in the U.S. House. Late Tuesday afternoon, the White House announced it would no longer cooperate with congressional investigators. Late this afternoon, Vice President Pence indicated he’s consulting with the White House counsel’s office about releasing records about his own conversations with Ukraine’s president.

Pence told reporters he “never discussed the issue with the Bidens” with Ukraine’s president. According to Pence, internal White House discussions as well as contacts with Ukrainian officials that involved him or his staff were focused on “broader issues” of corruption in Ukraine and a lack of European support of Ukraine.

Pence was asked if it was OK for President Trump to ask a foreign leader to investigate a political rival. Pence replied that he did not believe that’s what happened. When asked about his own public statements in 2016 that foreign governments cannot participate in the American political process, Pence said he stands by those remarks and, according to the vice president, that is why Trump “is so concerned about foreign interference in our elections.”

Pence said the “plain reading” of the notes from Trump’s call with the Ukranian leader shows Trump “did nothing wrong.”

Pence was in Iowa for an event promoting the USMCA and a private fundraiser for Republican Joni Ernst, who is seeking a second term in the U.S. Senate.