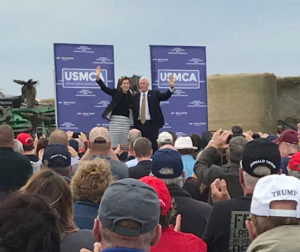 Vice President Mike Pence told a crowd at a farm near Waukee today that he was in Iowa to “turn up the heat” and urge Democrats to ratify the U.S.-Mexico-Canada Agreement.

“The truth is, and we all know it, Democrats have been spending all their time on endless investigations and a partisan impeachment, but enough is enough. The American people deserve better,” Pence said, to cheers from the crowd.

Republican Senator Chuck Grassley, who spoke to the crowd before Pence, said he’s gotten positive signals from the top Democrat in the U.S. House.

“I met with Speaker Pelosi earlier this year and believe that she wants to get to yes,” Grassley said, “and I was glad to hear her say that impeachment politics won’t get in the way of the legislative action.”

“I’d say that it is time for the House to pass USMCA. Don’t you agree, folks?” Ernst asked and, as the crowd applauded, she added: “That’s right.”

The event was staged outdoors, with farm implements positioned behind the speakers and a large American flag hanging from a massive grain bin. During his remarks to the crowd, Pence named the three Democrats in Iowa’s congressional delegation and urged Iowans to contact House members Abby Finkenauer, Cindy Axne and Dave Loebsack about the trade deal.

“I came to Iowa today to say it’s time for the Democrats in congress to do their job, put politics aside and pass the USMCA this year,” Pence said.

Republican Governor Kim Reynolds used her time at the microphone to publicly thank the Trump Administration for its recent biofuels announcement and for renegotiating the North American Free Trade Agreement.

“USMCA is strong, balanced and reflects the dynamic economy in which we live,” Reynolds said.

Former Lieutenant Governor Patty Judge, a Democrat from Albia who has founded a group called “Focus on Rural America,” said earlier today that Trump needs to listen to some of the concerns House Democrats have with components of the USMCA.

“This go-it-alone, cowboy style of international trade negotiation does not work and so hopefully he will understand that,” Judge said. “I, again, am not going to hold my breath.”

Judge served two terms as Iowa’s secretary of agriculture before serving one term as the state’s lieutenant governor.