You are here: Home / Outdoors / Fall colors starting to show in Iowa 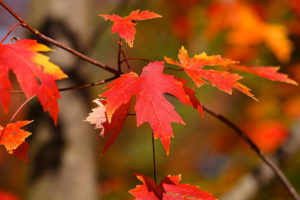 The beauty of autumn is about to come alive with the change of colors on Iowa’s trees.

Joe Herring, an Iowa DNR forester from Iowa Falls, says the fall leaf show is already starting. “If you see some really bright red colors, if you’re in a forest area on vines that are growing up trees, those are woodbine,” Herring says. “Along the roadsides, we’re seeing nice red colors in the sumac bushes as well as some dogwoods.”

Some trees in far northern Iowa are beginning to show reds and oranges, but the majority of the state is still in the early stages.
Herring says, “Across the landscape, you can see the gradual change from the deeper forest green color to more of a lime green and some yellows showing up from some cottonwood and ash and walnut and elm right now.”

Herring predicts the color show won’t really peak in Iowa for at least another week, likely closer to October 19th. “That’s a little later than I normally would predict,” he says, “but I think with the late start to the growing season that some of these trees will hang on just a little bit longer than normal.”