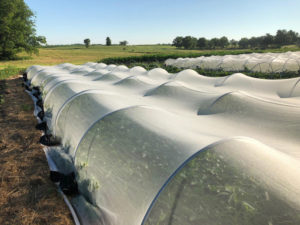 Researchers at Iowa State University are developing short, fabric-covered tunnels which could be the solution to protecting certain organic crops from destructive pests.

By design, organic agriculture limits the products that can be applied to crops to kill pests and weeds. ISU’s Mark Gleason says the mesh-covered tunnels let sunlight and rain in, but not the bugs.  Gleason says, “The basic idea is to try to keep pest insects out and not only them but the pathogens, the bacteria in particular that they carry, that can cause disease on these cucurbit crops.”

Those are things like cucumbers, pumpkins, and melons. Gleason says the tunnels are pricey and the next stage of the research will look at cost-effectiveness and what farmers think of the system. The so-called mesotunnels are shorter than traditional high tunnels, which are semi-permanent structures. They’re also taller than low tunnels, which can only be used during the early part of a growing season, before the plants flower.

Gleason says, “It’s a sweet spot because it’s providing enough space inside that tunnel, number one, for the plants to grow and, number two, for bees inside the tunnel to be able to pollinate.” Mesotunnels are about three-and-a-half feet tall and are built from a sturdy electrical conduit that’s bent in a semi-circle and covered with a nylon-mesh fabric.

Farmers would have to mail-order bees, whereas now they rely on natural populations. ISU recently received a $2 million grant from the National Institute of Food and Agriculture to expand its work.