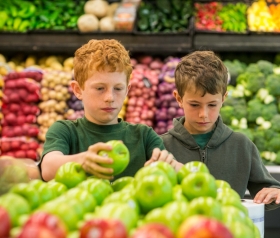 A new report on childhood obesity finds Iowa’s numbers aren’t budging, with more than 50,000 kids statewide falling into the category.

Victoria Brown, senior program officer for the Robert Wood Johnson Foundation, says the report looked at children between the ages of 10 and 17 over the past two years. “The obesity rate in Iowa for this age group, about 16.4% of your population, has held steady in recent years,” Brown says. “You rank as the 14th highest in the nation for childhood obesity.”

That’s about one in seven children, and Iowa’s rate of childhood obesity is about a point higher than the national average of 15.3%. Nationwide, the report found 4.8 million children in that age range are obese, a number that’s also remained essentially unchanged since the last report.

“Even though the rate overall has held steady in recent years, there’s still big health disparities across populations with this rate,” Brown says. “Black and Hispanic youth are much more likely to have obesity than their white or Asian peers. Same for youth from families with lower incomes, they’re at greater risk for higher obesity.”

While it’s discouraging the state and national numbers haven’t fallen from year to year, Brown says it’s also important to note they’re not rising either. “The message here is to stay the course,” Brown says. “A commitment to healthier school meals to make sure that kids get strong nutrition at school breakfast and school lunch, considering that kids consume over half their calories each day in their school buildings, is really critical.”

She says it’s also important to maintain access to SNAP or food stamp programs, that we continue to build “walkable” communities, and address things like “food deserts” or urban areas where it’s hard to buy affordable or good-quality fresh food. The report found Mississippi has the highest childhood obesity rate at 25.4%, while Utah has the lowest rate at 8.7%.