You are here: Home / News / ISU researcher finds the impact of the power pose is a myth 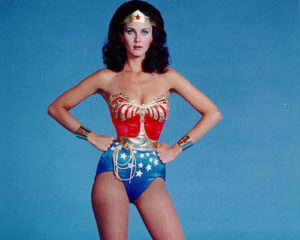 Wonder Woman in the “power pose.’

An Iowa State University researcher says the idea that striking a “power pose” in the mirror can boost your confidence, abilities and testosterone levels is complete bunk.

The concept of power posing gained popularity after a study came out about a decade ago, but ISU psychology professor Marcus Credé  says there’s no scientific evidence it really works. Just what is a power pose? “The most common example is standing like Wonder Woman, your hands on your hips, upright,” Credé says. “Some people extend their arms up in the air. It’s a pose associated with powerful people. You’re taking up lots of space, you’re standing very tall and upright.”

Credé says there’s not a single study to support claims power posing is effective, while the original 2010 report made numerous claims. “One was that it would make you feel more powerful,” Credé says. “The second one was that it would make you more willing to take risks, which in many business settings is important, you know, you put yourself out there. It also claimed it would increase your testosterone levels and lower your cortisol levels, and cortisol levels are associated with stress.”

The original study has drawn criticism as the results couldn’t be replicated, but a follow-up study in 2018 presented an updated analysis of the research. Credé says from all the studies he’s reviewed — some three-dozen of them — power posing just doesn’t

work. “Some people say before you go for a job interview or give that big presentation at work, go to the bathroom and power pose for a couple of minutes,” Credé says. “There’s nothing wrong with that and I don’t think it’s going to hurt you, but don’t think that you can substitute good preparation for an interview or a presentation with simply power posing for a minute or two.”

Power posing is the subject of a TED Talk which is reportedly the second-most viewed TED Talk on YouTube, with some 70-million views. There’s also a book on power posing that was a New York Times bestseller. “A lot of people have been exposed to this and there’s a huge industry on power posing where the main proponent goes around the country giving talks at $100,000 a pop telling people to power pose,” Credé says. “There’s simply no evidence for this. To me, that’s somewhat troubling that so many people have been sold this idea that really has no scientific basis.”

Credé compares power posing to a drug being sold to the public without a single study ever having been able to show the drug works better than a placebo — or better than doing nothing.